John Freeman is regarded as having the Methodist Society in East Finchley. He set up a meeting for prayer and fellowship in Lincoln Cottage at the corner of the High Road and Strawberry Vale. As the church grew it moved to King Street, East Finchley in 1829 and to its current site in the High Road in 1897. A hall and school rooms were added in 1908.

Groups within the church have flourished and changed to fulfil the needs of its people and neighbours. The Sisterhood was formed in 1906 and a morning Junior Church was started in 1937 to suppliment the Sunday School.

In 1940 the blast from a land mine damaged the roof, windows and organ. The Primitive Methodist Church building (now the Youth Theatre) was gutted by a bomb and so the two churches were combinded. In 1953 we welcomed members of the King Street Chapel, which had become a Presbyterian Mission since Methodism left it.

In 1948 the World Council of Churches was formed and, on the subsequent wave of ecumenism, EFM became one of the founding members of the Finchley Council of Churches (now Churches Together in Finchley - CTIF). It is through CTIF that we take part in the annual fund raising for Christian Aid.

Young Wives' Club (later, the Wives Club) came into being in the 1950s and in 1972 we celebrated 150 years of  Methodism in East Finchley. 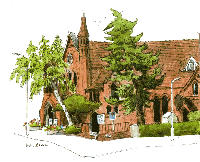 The building has gone through two major adaptions in recent years. Its original more traditional Methodist Church interior with a balcony at the rear of the worship area and fixed pews, has evolved into a welcoming, flexible space able to adapt to a variety of worship styles and communal uses.