News Releases
from The Methodist Church 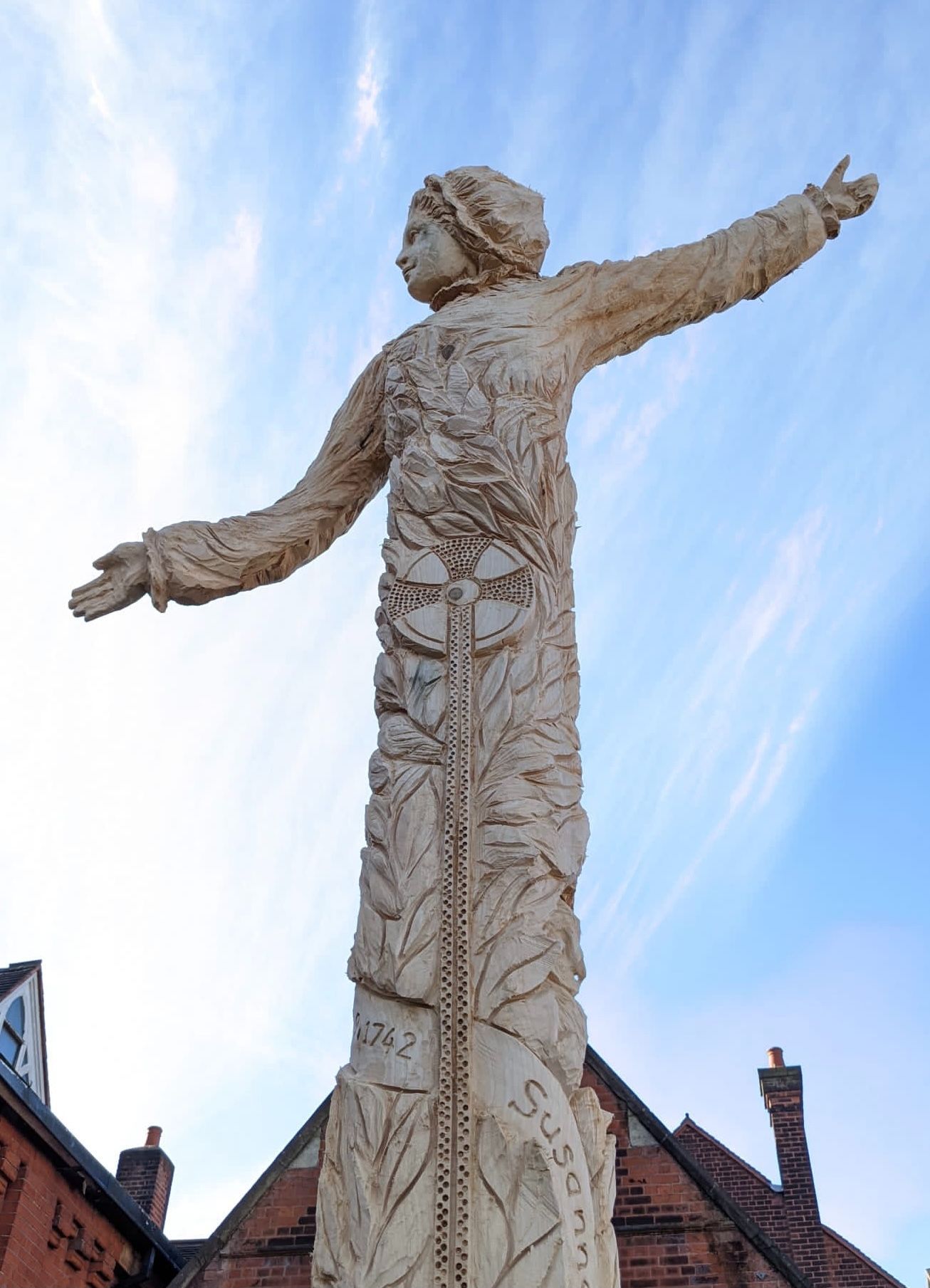 The tree trunk of the cypress that graced our garden has miraculously been transformed into the first public statue (of which we are aware) of Susanna Wesley, mother of Methodism and John and Charles Wesley. Sculptor, Simon O'Rourke, worked all last week to carve the statue which includes woodland animals and a cross matching those in our windows.

The sculpture is the first part of the makeover of our garden and celebrating the 200th anniversary of Methodist witness in East Finchley.

The Blessing of the Marriage of Robert & Graham 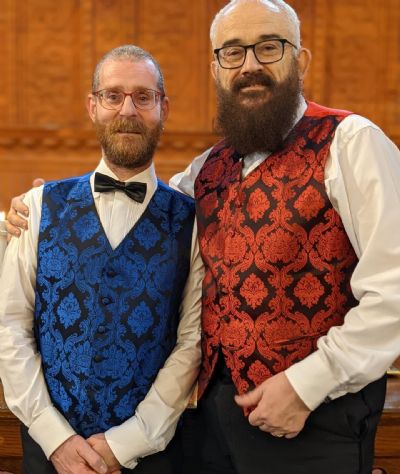 It was with great excitement and joy that the EFM was able to hold its first same sex marriage blessing on Monday 30 August. Robert Alderman and Graham Chestney were married on this day nine years ago and had been waiting for the opportunity to have their marriage blessed in the church where Robert had grown up and Graham joined in 2006.

This was possible because on 30 June 2021, and following prayerful consideration by the whole Church, the Methodist Conference voted to confirm provisional resolutions on same sex marriages conducted on Methodist premises or by Methodist office-holders.

The East Finchley Methodist Church Council agreed, in an indicative vote, that it would permit same sex marriages on its premises when this becomes available. It also agreed that the blessing of a same sex marriage or partnership previously conducted at a registry office or authorised venue may take place thus allowing Robert and Graham's blessing to go ahead.

We wish Robert and Graham much joy and happiness as they continue their married life together. 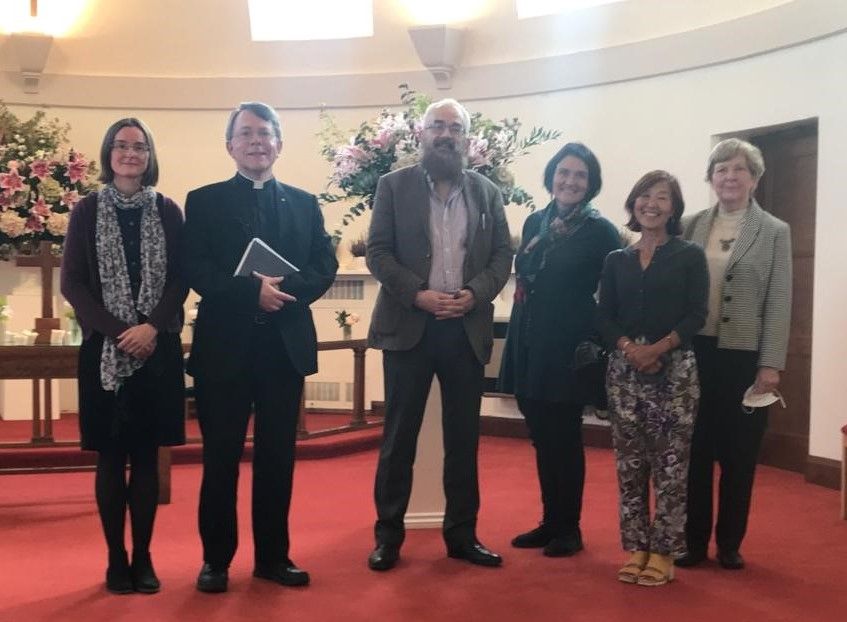 It was with great excitement and anticipation that we welcomed Revd Dr Martin and Mrs Fiona Wellings. We had been looking forward to this day ever since we met them on a cold and damp January day followed by the news that the circuit and Martin had been matched and that minister and circuit were willing for the appointment to be made.

But it was not a welcome service that we are used to. COVID-19 restrictions meant that there was a reduced, socially distanced congregation and that the service was held at Manor Drive Methodist Church, Friern Barnet where the Zoom/YouTube technology enabled the rest of the circuit witness the service, rather than one of the churches over which has Martin pastoral responsibility.

Representatives from EFM, FMC, and the circuit were involved in the service and Martin and Fiona were welcomed on behalf of EFM by Jane Ray receptively to his new churches, by the London District by chair, Revd. Dr Jongi Zihle, by Deputy Lieutenant for the London Borough of Barnet Martin Russel to the borough and by Revd Ben Twumasi and Wendy Turl to the circuit. Martin spoke inspiring and graciously, giving us a foretaste of sermons, pastoral care and leadership to come.

The service is available on YouTube by clicking on this link: - 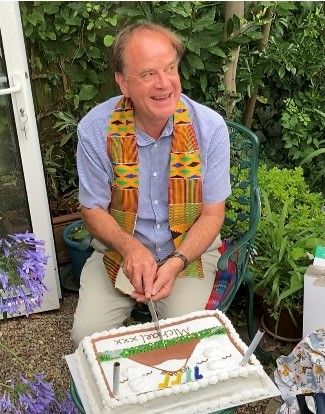 At a social distanced gathering within the current COVID-19 regulations but augmented by those on Zoom we met to say goodbye to Michael and Jill at the garden of senior steward Jane Ray. It wasn't the celebration of Michael and Jill's ministry that we had wanted but it was still a very special occasion.

Michael and Jill have been with us for 13 years, longer than most Methodist appointments but Michael's appointment to the superintendency during his residency in the circuit made this possible. Of course this was sad to see both of them move on but it was also a time for celebration. There were speeches, of course there were speeches.

Andrea McTeare mention Michael's gift for leadership and how he was people person. There were many who had benefited from pastoral nurturing on many happy and sad occasions. Jane, in an acrostic on his name, expanded on his many influences and qualities.

Jill was not forgotten for unfailing support of Michael in his ministry, EFM in its witness and, particularly, her leadership of Junior Mission for All.

Gifts were presented. For Michael, a inflatable banana costume (don't ask), for Gill, a very large bar of chocolate (for all the cakes) and for them both, an original oil painting of Flask Walk in Hampstead to remind them of one of their favourite walks.

We wished Michael and Gill God's blessing as they move to Bedford and a new appointment.

Easter at EFM is always a busy time. It started with a service of reflection and meditation on Good Friday. The Passion narrative from Mark's Gospel was read and this was followed by a period of reflection and activity when the congregation were asked to use their artistic skills to create images, models and poetry inspired by the narrative.

At 10.30 am there was the treat of decorating the cross with flowers to celebrate new birth in Christ Jesus. This is flower arranging by committee as the whole congregation joins in. The Easter Gospel narratives were read (Mark's Gospel) and meditation helped us reflect on the message contained there.

Easter is always a busy but rewarding weekend. 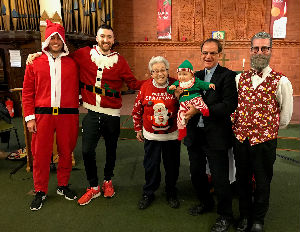 The Christmas Day service at EFM is always special. Families gather to worship, and celebrate the birth of Jesus before heading off to their own festivities and merriment at home. This year there was the addition of some festive costumes to brighten an already joyous occasion. Fred, Leo, June, EFM elf (in the arms of Revd. Michael) and Graham showed off their Christmas wardrobe to the delight of all who gathered for the morning service.
The Christmas story is a familiar one but there is always something new to hear in those familiar words but none as great as the Good News
'God contracted to a span, incomprehensively made man'.* 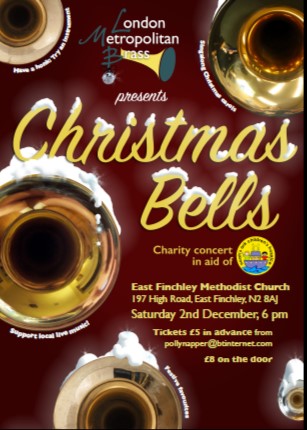 Advent at EFM will get off to a resounding start when London Metropolitan Brass present 'Christmas Bells' at the church on Saturday 2 December at 6 pm. The band are become a welcome and regular feature at EFM and fill the church with music and people.

We are promised 'Singalong Christmas Carols', 'Festive Favourites' and even 'Have a honk: Try an Instrument'.

This time all the funds raised from the concert will be donated to Noah's Ark Children's Hospice.

Tickets at £5 in advance are available from
pollynapper@btinternet.com or £8 at the door. The concerts sell out quickly, so best to book in advance. 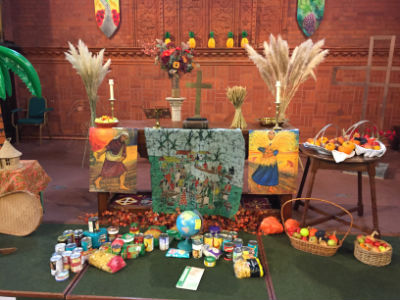 EFM was decorated for our Harvest celebrations this year, which spanned the weekend of 30 September/1 October. 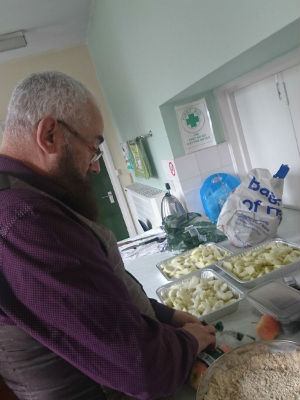 members of the church.

On Sunday, the emphasis of our service of thanksgiving was the people of Zimbabwe. We heard from two of the congregation who had travelled to Zimbabwe and one who was born and raised there about experiences there. This year All We Can is raising funds to help the  people of Zimbabwe overcome the poverty, hopelessness and injustice they face daily. In addition to funds raised for this cause, gifts of food were brought for Homeless Action in Barnet. 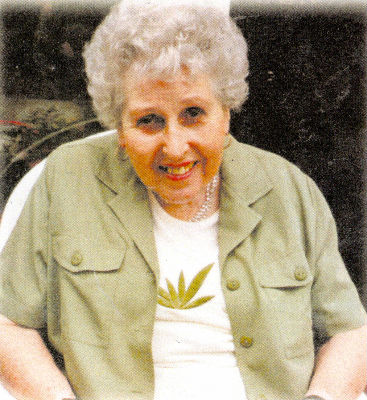 On Wednesday 14 June family and friends met at EFM to say goodbye to our oldest church member, Rene Bell, who died on 24 May at the age of 103. 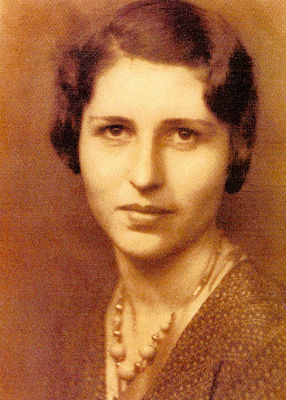 It was a time to celebrate a life well lived in faithful service, patient good humour and grace. All were able to share their memories of Rene, who example had affected so many during the service or at reception afterwards. It was clear that she was held in great affection. 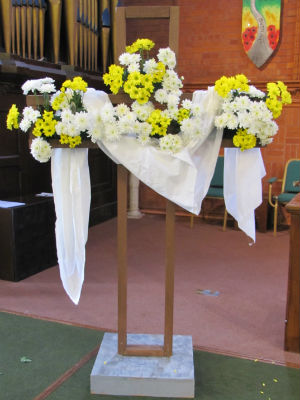 Easter is the most significant festival in the Christian calendar. The period of Lent is a preparation of seven and a half weeks that culminates in Good Friday, where we mark the sacrifice that Jesus made of himself for our salvation, and Easter, when we celebrate his resurrection; the overthrow of the power death.

At EFM we held a service of reflection and meditation on Good Friday. The Passion narrative from Matthew's Gospel was read and this was followed by a period of reflection. 14 modern images of the stations of the cross were displayed around the sanctuary and the congregation were invited to use these as part of their devotions. 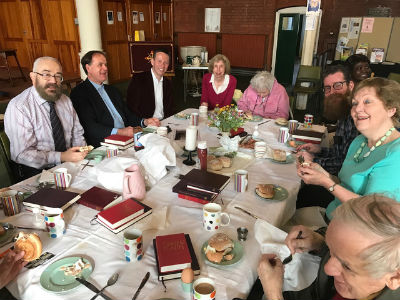 Easter started early (for some) at 9 am, when we held a service of Breakfast and Holy Communion. The reading of the visit to the empty tomb from Matthew's gospel was followed by prayer and then a simple agape breakfast. The service was completed with hymns, a short sermon and prayer. 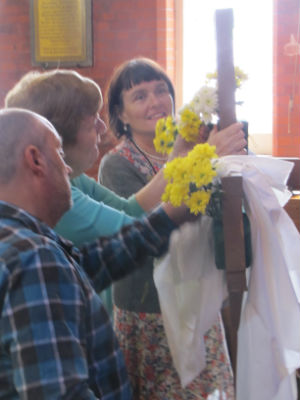 For those attending the 10.30 am there was the double treat of decorating the cross with flowers and a Simnel cake to assist our celebrations. Two of the Easter Gospel narratives were read (Matthew and John) and short play and meditation help us reflect on the messages contained there.

It's been a busy weekend but one that has been profound and stimulating.

We are about to use a little piece of porcelain history to raise money to help those without a loo of their own. Upwards of 2.4 billion people in the world do not have somewhere safe and hygienic to go to the loo, something we take for granted. EFM wants to help by buying at least one loo (£60) and ideally a whole school block (£240) to transform and save lives. It’s not just about loos, of course, but also about the supply of clean water and basic sanitation in places where water-borne disease is a constant problem.

Whoever makes the biggest donation at a special event on the 22nd April can take the loo home with them but everyone who donates will get a ‘thank you’ photo of the super loo.  Even if people can only spend a penny it all helps”   Anyone who can’t be there on the night can leave an offer on 0208 444 2016.  You can check on toilettwinning.org/what-is-toilet-twinning to find out more.

The bidding will take place at the church on Saturday, April 22nd 6pm with entertainment provided by the locally based London Metropolitan Brass Band. 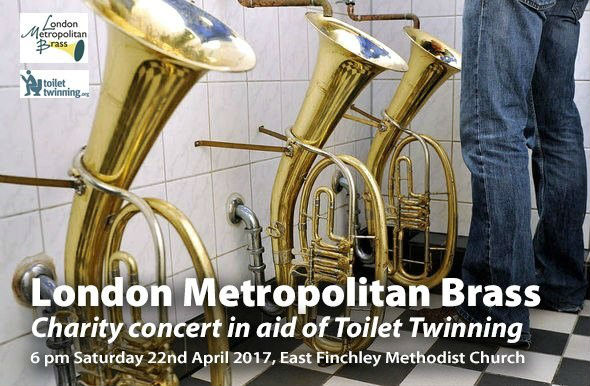 In June 2009 our minister, the Revd Michael Giles, visited Ghana for three weeks as part of his sabbatical. He visited a number of Methodist projects and churches and, as a result, made valuable contacts.

A further trip to Ghana was undertaken in January this year.

Click on the links below to find out more.