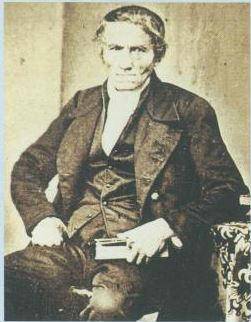 He looks somewhat forbidding! but let's assume a very old photograph has to do less than justice to anyone. And whatever his looks and personality Christoph Müller was good at sharing his Christian faith and his acquired Methodism, as you will be reminded in the following extract from the EFM Newsletter of May 1991 when Friedemann Burkhardt, our German theological student, first visited EFM ...

It seems Christoph Müller was born in 1885 in Winnenden, Würrtemberg, his father a butcher, member of the town council and a pietist (Moravian). Christoph emigrated to London in 1806, to avoid a call-up of Würrtemberg men to fight with Napoleon against Prussia. He began work as a pork butcher and joined the Methodist society at Great Queen Street Chapel. In 1813 he married Ann Claridge, daughter of Edward and Elizabeth Claridge, Edward being a butcher too and owner of the Red Lion in Finchley East End. They moved to Finchley in 1814. An amnesty in 1815 for political refugees allowed Christoph to journey home occasionally, where he told the local Moravians about Methodism in England.

Spending July-September 1830 in Winnenden when his father was ill, Christoph Müller's prayer meetings generated a great revival. When he returned to London in October, he left behind a Methodist-style group with two class leaders. As the group grew, the members asked the Wesleyan Mission in London for a Methodist missionary. Since no-one else answered the Mission's call for a lay preacher who could speak German, Christoph and Ann Müller moved to Würrtemberg, and so Methodism began in Germany.

In September 1991, when Friedemann Burkhardt was again in East Finchley, we had the pleasure of sharing our morning service at EFM with a party of 36 German Methodists who were in London to see historic Methodist sites. Our then superintendent minister, the Rev Don Pickard, was responsible for putting East Finchley on to the list. We learned that the Methodist Church in Germany had at that time grown to about 50,000 members, a respectable number making a small island in the Catholic/Lutheran/non religious sea of Germany.

From an EFM Newsletter article by Margaret Pacey.